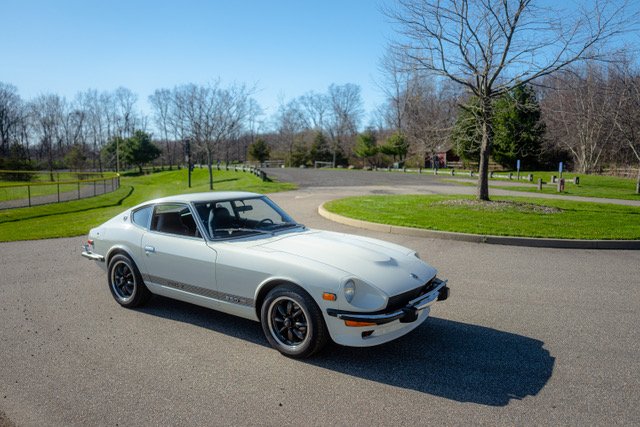 Cody Oliver’s Z Story: My affection for the S30 chassis and Z cars began around 2011 when my Mom had purchased a low-mile, red, 5-speed example of the iconic 1990 Mazda Miata. After having earned my license the previous winter, at the age of 16, I was curious about what being out on the road and driving really could be. I bought this Miata from my Mom in the summer of 2012 and began to enjoy the backroads of Connecticut, with the top down, learning how to operate a manual transmission car with help from my brother. It was such a fun experience! This is where my appreciation for a sleek, fun, manually operated and tight handling car all started.

As cool as the Miata was…I wanted something even better. With the company of my brother and some friends we began to make our way into the car scene, going to different shows and driving to events around the state. This is where I first saw my favorite examples of the Z heritage in person. I remember taking photos of an army green Datsun 240Z at Lime Rock Park that I made my computer background as soon as I got home.
I began searching Craigslist on a consistent basis and saw the occasional Z but they were a bit out of my price range at the time, being only 17 and not having a real job yet. Man how prices have changed since then though!

Fast forward 10 years and I have finally found and purchased my dream Z car. A 1974 Datsun 260Z with only three previous owners.
I had an exceptionally special feeling for this Z when the ad for this car came up on Craigslist and began to think that this could actually be the one. Over the past two and a half years I really got serious about purchasing a Datsun and had spent countless hours on sites like Craigslist, Facebook, BringATrailer and various forums looking for the right car. In the Spring of 2021 I gave up my search after having no luck or hope left because there had been many examples of long chat threads, phone conversations, and 2-3 hour drives with the Z’s being sold out from under me. I had gone to see four or five examples that seemed promising through photos and conversation but unfortunately continued to disappoint in person. Luckily I managed to hold out even though my desire to own one was so strong each time.

Everything changed though in April of 2022 when I gave Dave, the previous owner, a call shortly after I discovered the ad that he had posted up locally on Craigslist.  His Z was only 45 minutes away from where I lived. This was the closest example to me that I would travel to see, which in some ways was another sign for me that this would be the one. Upon further text conversation and asking more questions than he probably cared to answer I decided to make the trip to see the 260 one day after work with my brother. After the short drive down to the Connecticut shoreline I was greeted by the sparkling white Z in the driveway of Dave’s home. I couldn’t help but smile when I first saw it.

We got out of my car, walked to his front door, knocked and waited for the man to greet us. He was extremely kind and soft spoken as he described the car and it’s history with great detail and a very educated background.
Dave told us that he was the third owner of this car yet he had a much longer relationship with it. He purchased the Z in 2005 from the second owner, who was the kindergarten teacher of his son, and the woman that had driven this car off the lot at Turtle Motors in 1975. Funny enough Dave himself was one of the mechanics and tool machinists at the local Saab repair shop where this owner would actually bring the Z in to be worked on. He told us that he was actually the one that had fixed, repaired and maintained this 260Z for her during her ownership. It’s not often that you buy a car from someone that knows a car this well. This would mean that I would be buying a Z from the man who practically maintained the car its whole life!

With the car raised up on a jack-stand I was able to see for myself the amount of care that this Z was shown and proof that the car was always garaged and never driven in poor conditions. The underneath was very clean and had a nice layer of undercoating protecting it. The interior was almost as good as new with a crackless dashboard, working clock, original spare tire as well as having the original jack and tool kit in their respectable places. It was really impressive to me that every gauge, electronic component, interior and exterior light worked. I mean even the retractable antenna went up and down without issue!

After making a deal together that afternoon Dave agreed to take a bitter-sweet final drive in the Z and deliver it to my house only a few days later.
I cannot express how excited I am to be behind the wheel of my dream car. After only a week of ownership I have already put 300+ miles on the odometer. My 1974 Datsun 260Z is an absolute blast to drive and I really look forward to continual experiences and impact that it will have on my future.